In 2014, Royal Oak voters approved a 10-year, 2.5-mill tax increase to upgrade local streets. The millage will raise approximately $5 million annually to improve up to 214 miles of local streets in the city.  Millage funds are not used for road improvements on major roads.


How does the city decide which streets get done and when?


The engineering division uses the PASER system to rate all the local roads in the city. Pavement management theory concludes that it is best to work on the higher-rated roads first in order to maintain and sustain roads in moderate to good condition. It requires less money to continually maintain roads in moderate condition rather than replace the entire roadway.

This targeted approach is intended to not favor any area by placing them first in the lineup of improvements. Each neighborhood will see improvement activities alternating between concrete street repairs and asphalt repairs every two to three years until the program is completed. It also allows targeted types of improvement to take place without having conflicts between numerous contractors. The schedule also distributes the construction management and oversight into manageable individual projects.

The city re-evaluates the schedule each year, and typically some modifications are made to better coordinate with other city projects and to account for updated road rating data.  The maps and timeline provided will be updated as needed. 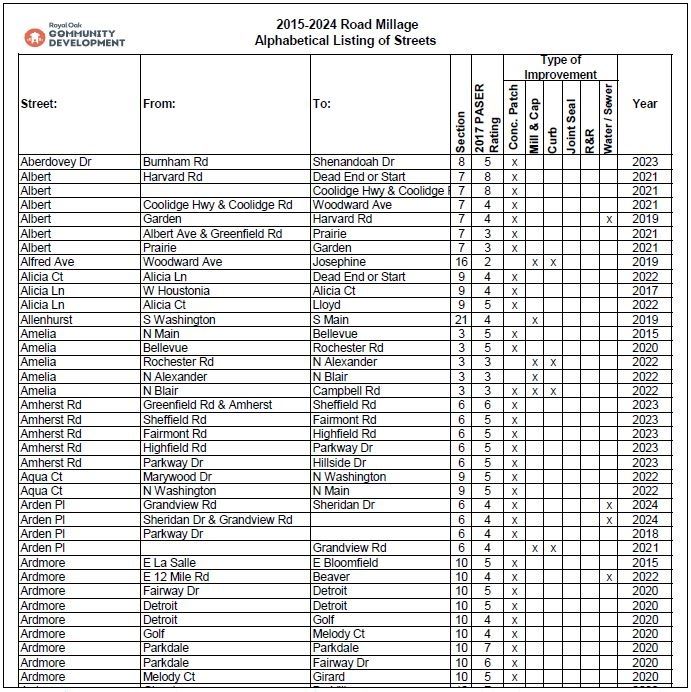 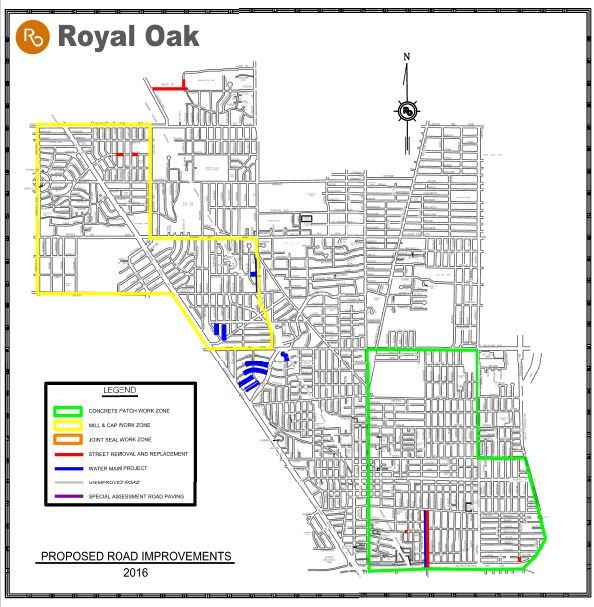 The Engineering Division oversees and implements the city’s road millage program. This program funds local street improvements only. There are four major types of improvements scheduled throughout the city each year.

The total amount of reconstruction will be divided up into the first five years of the millage, focusing on the streets that cannot be corrected with maintenance work and must be fully replaced. The streets to receive full reconstruction are highlighted in red on the proposed annual construction maps.

For this program, the city will be divided into five major areas. In order to address the vast amount of asphalt resurfacing needed in the city, and not favor any one area over another, the city will only work on half of each area in any one year focusing on the better condition roads first. The remaining half of the work in each area, which is on roads with lower condition ratings and have decreasing service life, will occur five years after the initial half is completed. The city feels that a significant cost savings will be achieved by following pavement management protocols of addressing the better roads first in this instance.  A larger number of asphalt and composite roads will be addressed at the outset preserving and extending the service life of the pavement.

Streets with deficient sections of concrete will be included in the millage program, and also be divided into five major areas. In the first five years, the city will focus on the worst areas.  The remaining half of the work in each area, which is on roads in better condition and have additional service life, will occur five years after the initial half is completed. Concrete is inherently a more durable material and concrete streets typically have longer service lives when properly maintained. The city believes that there is little cost savings to be achieved by following pavement management protocols of addressing the better roads first in this instance.

The city plans to perform maintenance on streets that only require joint sealing to increase their service life within the first five years of the program. This will increase the lifespan of asphalt and composite streets that are currently in good condition. The city will also joint-seal newly resurfaced streets one year after resurfacing is complete.