About the Royal Oak Farmers Market 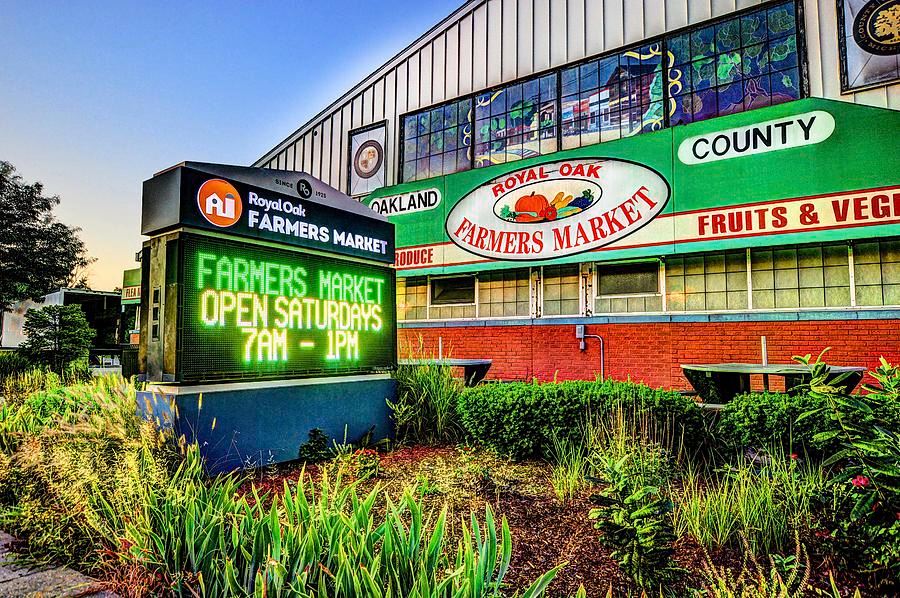 The Best Year Round Market Around

What began as a community farmers market in 1925 to serve the produce needs of a growing town has become a city institution, reflective of the development and heritage of Royal Oak, Michigan. Royal Oak was incorporated as a village in 1891. It became a city in 1921 with a population of 6,000. By 1930, the population had grown to 23,000. The city's location just outside Detroit helped spur its growth, especially when train tracks were laid in 1934 for the Grand Trunk Railroad. The market, which is located a few blocks from Detroit's main thoroughfares: Woodward Avenue, I-696 and I-75, serves three counties.

During the '30's, Michigan was a major truck garden state. So much rhubarb was shipped through the city that Royal Oak was once considered the Rhubarb Capital of the world. Noting the need for fresh produce for the growing community, the city of Royal Oak and Oakland County jointly decided to rent the corner of Fourth and Troy streets, to establish a municipal open-air farmers or community market in 1925. The early market drew farmers from 25 to 30 miles. Potatoes, apples, cabbage, carrots, onions, farm fresh butter, and poultry were among items sold.

In 1927, a permanent brick building, 12-feet high with 23,000 square feet was constructed to enclose the farmers market. The roof was made with cement tile, with two rows of lights, and the floor was concrete to allow cars to drive in for unloading. On its first day of business, more than 300 consumers purchased from 75 producers. Some family members from the original producer vendors still sell at the market.

Since its inception, the market has maintained a strict "farmer must grow" rule. In 1941, rabbit, farm fresh butter, and buttermilk were among the items farmers sold. During World War II, meat, dairy products and butter were rationed. The grounds of the community market were used for Home Guard volunteer practices and Boy Scouts drum-and-bugle corps drills. Over the years, the building has been used for square dances, Halloween parties, public meetings, craft shows, to store fire trucks when a fire station was being built, and one couple who met at the market was married there in 1996.

By 1950, the market had 110 farmer vendors. In 1960, the community market's name was officially changed to Royal Oak Farmers Market. When redevelopment threatened the market's existence in 1996, demonstrators protested the proposed sale of the market. The city, which owned 40 percent of the market, purchased the remaining 60 percent from the county. The popular regional Sunday flea market, which began in 1978 to supplement the market's income, has grown to 90 vendors. Along with war relics, depression-era figurines and glassware, vendors sell antiques, handicrafts and collectibles. The Royal Oak Farmers Market has developed a remarkable stable vendor base that has attracted regular consumers who continue to come for locally grown produce.

In 2015 the market turned 90 and it still houses the area premier farmers market on Fridays May – Thanksgiving and on Saturdays 52 weeks a year. The market still maintains its strict "farmer must grow" rule but has branched out to include a wide variety of meats, cheese, poultry, seafood, dairy, vegan and gluten free baked goods and just about anything else you are looking for to complete your weekly shopping. There is also a large variety of specialty food products all locally produced and beautiful plants, flowers and fantastic garden related items. In all the market host many producers on any given Saturday.

The popular Antique market is still going strong on Sundays 8 a.m.- 3p.m. all year and many rotating vendors are on display each Sunday.

There is truly always something happening here at the Royal Oak Market.